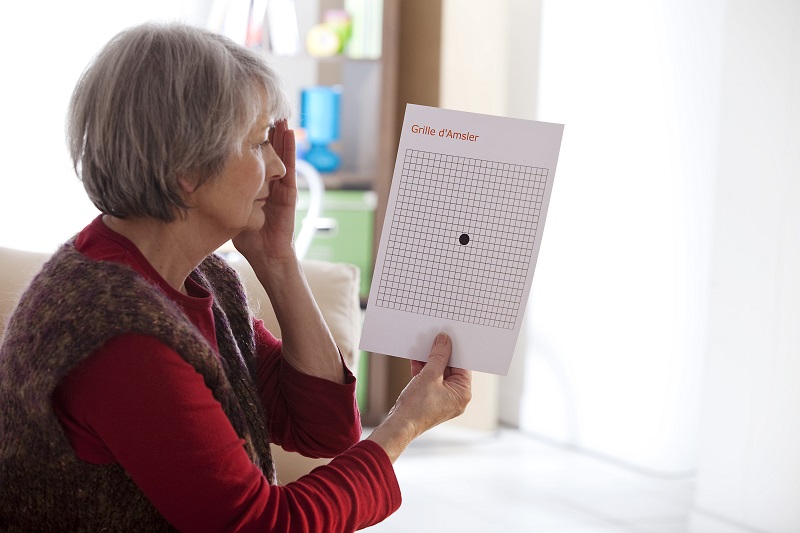 Macular degeneration, or macular degeneration associated with age (Age-related Macular Degeneration, abbreviated as AMD) is a chronic, progressive eye disease, occurring in people over 50 years of age. As a result, this disease causes damage to the retina (particularly its central area – the macula), which leads to deterioration of vision, and often complete loss of central vision, and consequently even blindness. The causes of AMD are still unknown. The biggest cause is considered to be the patient’s age – it affects 5-10% of those aged between 65-75 years, and 20-30% of those aged over 75 years (these factors relate to the developed countries and vary depending on the study and the definition of the disease). Other risk factors include: female (the results of studies on this topic are divergent), white race, the occurrence of AMD in the family, diseases of the cardiovascular system (eg. Hypertension), smoking, long-term exposure to intense light, and antioxidant deficiency (e.g.. vitamin C, vitamin E, beta-carotene, selenium). If one eye develops age-related AMD risk of such changes in the other eye increases by 10% per year.

The typical symptoms of macular degeneration include: seeing straight lines as wavy lines or distorted and progressive difficulties in reading. The disease progresses at different rates and may even lead to blindness. Macular degeneration is the leading cause of blindness in people over 50 years of age. It occurs in 8.8% of the population, often in women, and its prevalence increases with age. 28% of the population over 75 years of age has been diagnosed with AMD. Worldwide, the number of patients affected by AMD approaches 50 million. Due to the aging of the population the phenomenon of AMD increases, and 10% of people over 45 years of age are at risk.

The main method used in the diagnosis of AMD is a basic eye examination including visual acuity testing, and evaluation of the fundus by an ophthalmologist. If your eye care professional detects a central retinal degeneration, he or she may extend the examination to a non-invasive test (eye tomography) and fluorescein angiography. Patients themselves may assess the development of AMD through a regular Amsler test.

In addition, there are smartphone applications with necessary vision tests on pre-diagnosing the disease.

There are two forms of macular degeneration: dry type and wet type. Dry AMD occurs in approx. 80-90% of patients. It involves the appearance of yellow deposits called “drusen” under the retina, which degrades the visual acuity. This form develops more slowly and causes less damage. Dry AMD can be treated with medications to try to improve blood circulation, as well as a diet rich in fruits and vegetables and lowering cholesterol intake.

Wet AMD is a much more dangerous form of this disease. The eye, defending against ischemia produces additional, abnormal blood vessels. They overwhelm the retina and damage cells by producing scars, which leads to further damage. Visual impairment in this case is really fast, even in a few months. Vision becomes distorted; the patient may see “dark spots”. If left untreated, may lead to a complete loss of central vision in nine cases out of ten. This type can also affect young people. Treatment for wet AMD involves the destruction of abnormal blood vessels using laser light – as long as they are not located in the center of the macula. Another option is a relatively recent method – the so-called photodynamic treatment –it involves inducing a dye into the blood stream, which is captured by pathological vessels in the eye. Only the laser can subsequently destroy those vessels. None of these methods improve visionhowever; they only delay further development of the disease.